BONUS EPISODE: PUT AN XMAS IN THE BOXMAS

BONUS EPISODE: PUT AN XMAS IN THE BOXMAS

What do you want to hear on the podcast between now and Dec 12th? Who would you like to hear interviewed? Drop me a line at partlypolticalbroadcast.co.uk/contact or partlypoliticalbroadcast@gmail.com.

Crisis UK’s page on voting if you have no fixed address: https://crisis.org.uk/get-help/information-for-crisis-members/member-news/how-to-register-to-vote-if-you-re-homeless/

HOW DOES THIS POLITICS THING WORK THEN? Website: politicsforkids.co.uk

Watch Tiernan’s comedy specials on Next Up Comedy at: www.nextupcomedy.com/tiernanisgreat

All the usual ParPolBro stuff:

Yes, MPs have voted for a Christmas election meaning that its not just Santa that will be getting the sack in December. Thursday the 12th is the date because what better day to announce the victor of the third election in four years than on Friday the 13th, meaning the Brexit franchise has skipped from Halloween to Jason within a matter of days.

Labour announced that they would back a bill for a general election in December and of course they would because all party leader and sickly Mike Ehmantraut Jeremy Corbyn has to do is grow his beard out, eat loads and wear a red & white hat throughout then he’ll have a whole ton of free campaign material everywhere, even from Coca-Cola. With Labour’s announcement and the last few weeks of politics, you’d be forgiven for thinking that if the previously pro-election, then anti-election opposition who only wanted an election if no deal was off the table even though you can’t do that without a deal or revoking article 50, are now backing an election again, then chances are the Conservatives won’t back one anymore, the Lib Dems would only back one if it happened at nighttime and the SNP would only agree if pets were allowed to vote. Actually though, the bill was nearly pulled as the Conservatives said that if amendments to allow votes for 16 & 17 year olds or for EU citizens were passed then they’d pull the bill. I was shocked I tell you, shocked that the government didn’t want votes for the young or forrins. I mean, whatever next? Votes for poor people? People with disabilities? Foxes?

The debate was the usual tosh. Prime Minister and semolina sculpture of a landslide Boris Johnson did his usual blustering babble like a dog with its head of the window on a motorway and accused Labour of running scared of an election even though they’d just said they’d back one. Is this indicative of the screaming inside Johnson’s head that he’s constantly running headfirst into things that he’s absolutely terrified of? It would make a lot of sense. While Corbyn said that the country can now vote for a government it deserves, which is news to me as I had no idea there’d be a party running with a leader that’s just an old boot filled with wasps that someone’s drawn a frowning face on. An amendment for the vote to take place on December the 9th was voted on, a tactical play as that’d mean parliament would dissolve with no chance for the government to put another vote on their withdrawal agreement bill forward again. But it was rejected, probably because the 9th is also national pastry day and that’d be unfair to Conservative MP Mark Francois who no doubt has lots of school bookings for going round telling children what its like living life as a total pie.

10 Tory Rebels had the whips restored after rebelling against Johnson’s unlawful prorogation because nothing means anything anymore and Conservatives can reconcile their differences in order to make things shit for everyone else. Labour has cancelled its trigger ballots as nothing says successful campaign like wheeling out all MPs people might not want to vote for. They’ll be deciding on the fate of Dr Bunsen Honeydew tribute Keith Vaz and Emperor Palpatine Chris Williamson as there’s a chance that what voters really want is someone telling them their party said sorry for racism too much or getting solicited for sex while being sold a washing machine. Several MPs are also standing down including member for Pontypridd and Welsh Milhouse Owen Smith who is no doubt looking to spend more time fighting off hundreds of men so he can pull his wife. Former Conservative MP then Change UK Independence Group For Doo Dah Wotsits MP then Lib Dem MP and current woman at the school gates who tells you how great her kids are while ignoring them Heidi Allen is standing down from her seat in South Cambridgeshire on accounts of the dehumanising abuse that she’s received. Valid reason but I bet part of it is also because her constituents wouldn’t have known which of three boxes to tick to vote for her. And formerly Conservative Work and Pensions Secretary and now independent MP and physical embodiment of a cake in the rain Amber Rudd is no longer standing, but has still been declared fit for work.

So, what to expect for the election on December 12th, a full moon which makes sense as its hopefully some sort of conclusion to a looney phase. Well Johnson expects it’ll be a tough election, which won’t work for him as he needs a toff one to win. Conservatives MPs are concerned about knocking on doors at Christmas, not least because of the disappointment from voters who think their present pre-orders have arrived only to find one of many ghosts of Christmas futures scowling on their doorstep instead. Labour seem optimistic but have concerns that no one will want to deliver leaflets in Winter weather, but forget that people will need adequate fuel for the fire. Lib Dem leader and Lisa Simpson on cocaine Jo Swinson says the Lib Dems could win hundreds of seats in the election, so its nice to know there’s some sort of furniture raffle going on at the same time. And SNP leader and woman constantly ready for an 80’s themed party Nicola Sturgeon said her party are ready to tackle the Tories, which makes a nice change from Johnson tackling children. Weirdly Brexit Party leader and fridge mould with a face Nigel Farage has been mostly quiet which hopefully means he’s finally realized that’s likely to be his most successful campaign strategy. The Green Party say they’ve been talking to the Lib Dems and Plaid Cymru about an electoral pact but haven’t finalized anything, which is a shame as you think they’d be most keen to make sure votes don’t go to waste unless they can be reused.

So here we go, six weeks of this to go, and I just hope that whatever happens that Boris Johnson loses his seat as I genuinely think it’d be the funniest thing to happen ever. Dear Santa, all I want for Christmas is to be tucking into a fat lunch knowing that out there, Johnson is reaping karma for his lies & propaganda and desperately searching for job vacancies as a bowling alley buffer lane or a mobile sandbag. Will the opposition parties manage to unite though? Doubt it and they’ll just tear each other apart while Johnson convinces people that he’ll definitely get all the things done that his party have now not managed to get done several times. Potential party slogans?

Conservatives – Trust Us, We Lied To The Queen

Lib Dems – We’d Like A Desk By The Window Please

Green Party – A Green Party For A Caring And Confident Britain – yeah they just recycled their last one.

Independent Group For Change – Hello! Anyone?

What I do know is that with a Christmas election there’ll hopefully be manifesto-ho-hos, mistlevotes and wine, and at last until the 12th, forecasters can guarantee a shite Christmas.

Yes this is just a quick episode as episode 162 became a history podcast in record time. And I wanted to get you some quick jokes as you’re taking in how tedious the next 6 weeks of politics is going to be, potentially how nice it is to have an opportunity to get rid of the Conservatives and how depressing it’ll be when the country doesn’t do it. But also, I need feedback from you, aside from next week’s guest who’s already booked in, who shall I be talking to over the election campaign? Do you want stats, facts, people in hats? Analysists? Campaigners? Comedians? What do you need to make listening to this podcast worthwhile? Let me know at partlypoliticalbroadcast@gmail.com or all the social media pages or on the website.

My election pledge is that as much as I really really hate this government, I’ll be equally shitty and critical of all the manifestos as they come in, throw up bonus episodes if needed and I won’t be telling you to register to vote asap because that’s patronizing and I’m assuming you’ve already done that unless you’re an idiot. At the same time Crisis UK tweeted a link about where to get info if you currently have no fixed address, as that doesn’t stop you from voting, which is important, so I’ll pop that link in this pod blurb.

But let me know what you need, also maybe go back and listen to old episodes and share them if you think they’re important during the election campaign? Charlotte Hughes in Episode 127 on the horrors of people suffering from the vicious benefit system, Dr Frances Ryan in episode 146 on the slashing of rights for disabled people that’s happened under this government, or the interview with Katy Styles in the episode before that about the lack of rights or support for carers. Or maybe install Who Targets Me in your browser so you know who’s targeting you with campaign ads online and listen to my chat with Sam Jeffers all about it in Episode 111. You can go through the archives on partlypoliticalbroadcast.co.uk and maybe let me know if there’s quotes or bits I should edit together and repost?

Also please please donate to the ko-fi.com/parpolbro or join the patreon.com/parpolbro as damn, I’m going to need a lot of coffee to get me through this. And maybe pop an encouraging review on Apple Podcasts too?

A normal ParPolBro will be back on Tuesday when I’ll go through what we know about party campaigns so far, and a look at the Grenfell report too. Thanks for listening! Let’s get exhausted by an election together! 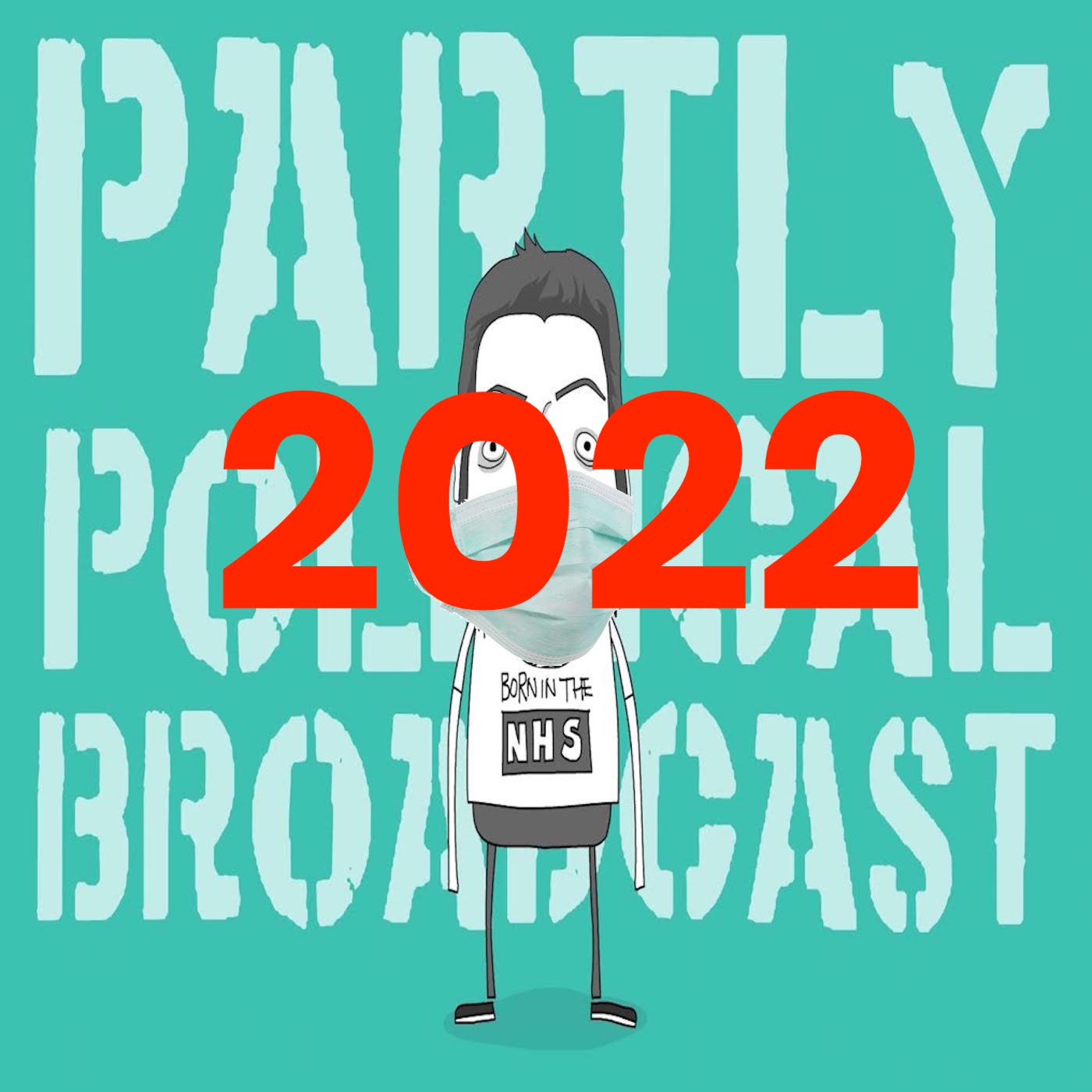 Not Including Hospitality – Omnicron Arrives, Policing Bill new worse bits and a chat with Alice Marshment at SEND Advocacy

Direction of Travel Is The Same – Not much Cop, everyone’s got 2nd jobs and a chat with Cllr Mathew Hulbert about local government

The Cruel World of Politics

Panic Surviving – COP26, Budget 21, G20 and a chat with Dr Garfield Benjamin about the Online Harms Bill and Meta

Skills, Skills, Skills – The Prime Minister’s on holiday again, Brexit Fallout and Jonn Elledge on if we’ve learned anything at all from the conferences

The British Renaissance – Conservative Conference horror show, Wage Not Growth and a chat with Patrick Brown at UBI Lab Networks

The Land Of Empty