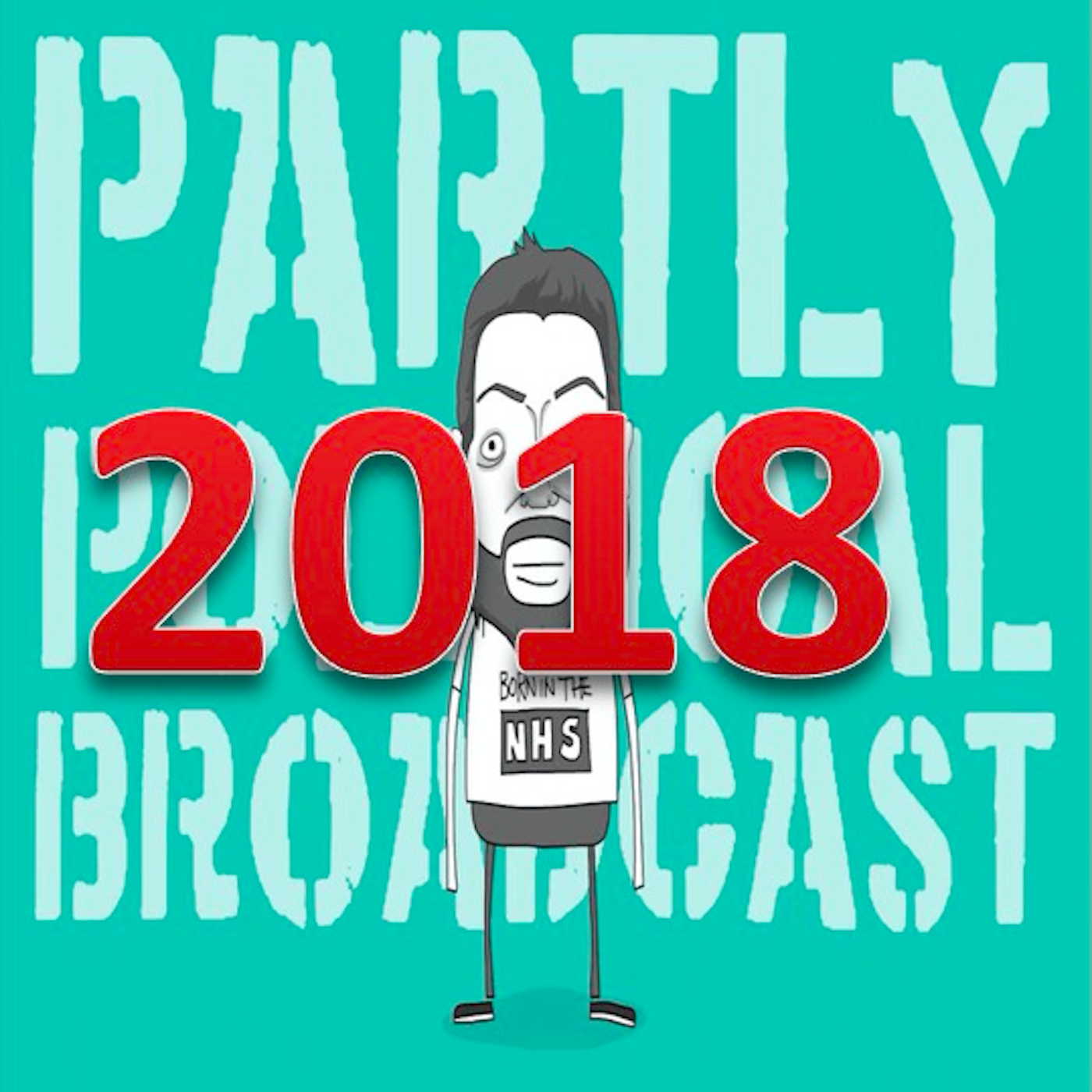 BONUS EPISODE – The mighty Newstradamus, predictor of all things political and newsy, gives you, the lucky lucky ParPolBro listeners, an insight into what the next year holds for us all. Have a very Happy New Year! ParPolBro returns all proper on January 16th.

Greetings Partly Political Broadcast listeners! It is I! NEWSTRADAMUS! I was Newstradumus the Great, but I was told I had to remove that due to copyright and if I didn’t I’d quickly go from being Newstradumus the Great, to Newstradums, to Newstradumus the Withdrawal. I wish I’d seen that coming. Anyway, I am renowned for my incredible political and news predictions! In 2015 I predicted the Lib Dems would win the UK general election, in 2016 I said Releave would top the Brexit vote and I knew, just knew, that Gary Johnson would become President of America and I pretty much nailed all of those. And so, your usual host Tiernan has asked I give you some predictions for this year ahead, 2018, or as it shall be known in years to come ‘oh no not another one’.

And so, let me focus on these next 365 days and here, HERE are my forecasts! 8 degrees and heavy rain from 2pm. Sorry, I mean here are my predicaments! Sorry, Predictions!

By July Theresa May still clings onto Number 10, using an industrial clamp and a full bottle of Loctite. It takes three weeks for the fire brigade to free her, though that is mainly because after years of public sector pay freezes, they refuse to treat it as an emergency.

Brexit phase two is stalled when in February David Davis walks into trade meetings with the German negotiators by saying ‘hope you fuckers aren’t as tricky to work with as those bloody German shits’ followed by an awkward silence and his slow realisation that really he should have checked his calendar properly. Davis disappears after this and is not seen again, despite reassurances from the Department of Exiting the EU that he definitely does exist and has been in preparation for years. Disgraced MP Liam Fox the disgrace is forced to resign after plans for him to make a trade visit to Turkmenistan involved him riding a Trident submarine all the way there like a banana boat while singing AC/DC’s ‘Gone Shootin’. He is rehired within two months because it’s obvious he has something on every other member of government or something.

Due to these delays the Open Skies policy collapses causing Ryan Air planes to be grounded across Lough Foyle and Carlingford Lough, fixing the border issue between Ireland and Northern Ireland, by creating a natural barrier. Ryan Air’s owner Michael O’Leary demands anyone wanting to travel between the two has to pay €2 and buy a scratch card.

In October after the UK has only managed trade agreements with Austria for low tariffs on wieners and selling them mass exports of toby jugs, Theresa May announces everything is going brilliantly and the best ever and that she wants a Brexit that is crispy on the outside but soft in the middle. Every single Brexit adviser resigns in August causing May to announce that her new advisor is Paul the Octopus. When told that he died in 2010, May refuses to comment.

In September Boris Johnson writes an article for Telegraph called ‘If you close your eyes it’s like none of it is happening’ before denouncing it a week later by saying he’s never closed his eyes in his life, instead using his stupid fringe as a shield against dirt or light. Calls for him to resign come a week later when he tweets a link to the locations of all UK secret service agents around the globe, before deleting it and saying why would agents be there when all those places are shitholes, before then having to retract that as well and individually visit each country and apologise. Which he does, but only while being racist about them at the same time.

In November Jacob Rees Mogg vanishes mid sentence during a commons sitting on his proposal to replace all the army’s artillery with Charleville muskets. There is little concern about his whereabouts until a month later he is spotted in a school photo in the National Archives from 1831.

In April the Conservatives will announce a new solution to the housing problem which involves training homeless people to form human pyramids then placing a tent over them, for shelter. This plan collapses, literally, after complaints from various music festivals that customers kept piling into homes assuming they were stages, causing many to die.

The Royal Wedding between Prince Harry and Megham Markle takes place in May. Donald Trump is not invited but doesn’t notice as he instead flown to a fake wedding at in Legoland, Windsor at the tiny version of Buckingham Palace there. His advisors keep insisting to him that he’s just quite far away, while handing him burgers.

The pound continues to fall, until November when it is officially decided to be the new currency of Australia. Adversely inflation rises so high that balloons become the official currency of the UK, making banks, for the first time ever, oddly fun to visit. Mr Jelly, a balloon animal making children’s entertainer becomes the fastest millionaire ever and Pixar’s Up is shown constantly on ITV2.

There are zero terror attacks in the UK in 2018 after ISIS announce that they’ve seen what the government are doing to the country and fair play, they really can’t top that. Sexual harassment in parliament reaches an all time low. Not in numbers, just as in an all time low, when Michael Fabricant proclaims that he is loveable during a PMQs, strips naked and runs across the seats with his wang out while crying.

In March Labour surge higher than they’ve ever been above the Conservatives in the polls, but due to Jeremy Corbyn’s stance of for the many, not the few, he shares out the excess popularity points with the other parties and the people of the UK, dropping Labour to the lowest position neck and neck with Agnes Cufflinks of Dorchester.

In the US in September of 2018 Donald Trump finally denounces the last bit of science in America and subsequently fires all his staff after he continuously walks into walls due to the lack of light in the White House. After three weeks of no food due to lack of refrigeration, no television including fox news, no cars, and 400 attempts to float to prove this whole gravity fake news wrong, Trump dies of exhaustion. The country rejoices only to feel saddened when they discover his last act was an executive order to make sure his successor has to also have the surname Trump. But as Eric takes the podium Tiffany appears from nowhere with a pointed stick and stabs him in the heart as that’s the only way to kill him, then she takes the presidency. Thus follows 14 years of authoritarian rule where people can only vote by likes on instagram and her 2011 single ‘Like A Bird’ is played on loop in all retail outlets.

The threat of nuclear war between the US and North Korea is ended some months earlier when Kim Jong Un just tells his citizens that he’s already won and Trump’s advisors tell him he’s won and hand him bits of paper where they’ve written that on so it must be true. He then gets distracted by something shiny and the situation is resolved. White supremacists terrifyingly grow in number in the US, leading to a huge neo-Nazi march across the country in hot August summer. Protestors decide that instead of showing up they should just line the streets with tin foil, causing all fascists to sun burn in the first 5 minutes and go home crying. Trump announces that they were well done on both sides.

Despite more votes going to his opponents, Putin wins the Russian Presidential elections by announcing that the rules were to get the least votes stupid, how come you didn’t know that? Supercharged by his win, he announces to the world that Russia have been hacking everyone’s elections but also everyone’s snapchats and if they want to complain about it, he’ll show everyone your nudies. Everyone under the age of 30 is terrified, and in the UK the Conservatives decide that if that’s the only group it affects then it’s not important anyway.

Society becomes so individualistic that in December when an even larger chunk of Arctic ice breaks off causing a tsunami that wipes out half of Brazil, Twitter’s top trend is the hash tag ‘hooray more cocaine for the rest of us’. Apple announce their new product in the Autumn call the iEye, which is actually just a nocturnal primate that trashes your house in search of grubs. They cost £3000 and sell out within 4 minutes. In June, the Disney Corporation buy the Metropolitan police. It does mean they have more funding than ever before, but civillians are concerned with the way all officers have to constantly smile and detectives seem to be more concerned with explosions than following any sort of case development or structure.

And lastly, Partly Political Broadcast podcast returns on January 15th to resounding applause, thousands of new listeners, new Patreon donations at www.patreon.com/parpolbro and Ko-Fi donations at www.ko-fi.com/parpolbro as well as two more reviews on the iTunes page so it finally gets 100 of them. Just before that though Tiernan’s new solo show Miserably Happy becomes available on NextUp Comedy.com in early January with it being available to buy at some point after that once he works his website out.

Have a very happy new year or failing that, just swear a lot and eat crisps.

Hot Union Member Summer – All the strikes, bye-elections and anti-lifers in the US

No Big Deal Is Worse Than A Bad Deal – Rwanda policy, tearing up the NI protocol and breaking all the laws

The Rise of Trashism – Sue Gray Report, Windfall Tax and a chat with Phin Harper at Open City